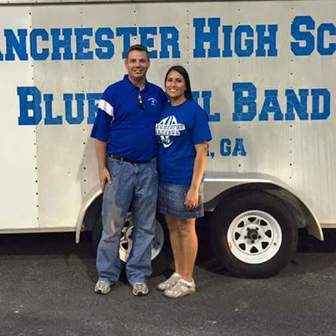 Mr. Libby has been the Director of Bands at Manchester High and Middle School since 2015.  He holds a degree in Music Education from Georgia State University.  A trumpet player, he studied with Mr. John Head and Mr. Kevin Lyons both former members of the Atlanta Symphony and both former professors of Trumpet studies at Georgia State. He has been teaching since 2007 and has taught general music, band, chorus, and drama at all different grade levels. He has also been an instructor at numerous band camps including West Forsyth, Alpharetta, and Taylor County High Schools. He has been a private trumpet and euphonium instructor since 2002 and maintains a private lesson studio.

While at Georgia State, Mr. Libby was awarded the Steve Winnick Memorial Scholarship for Trumpet playing. He also performed with the Symphonic Wind Ensemble, Brass Ensemble, and Jazz Ensemble. Mr. Libby is also enlisted in the Georgia Army National Guard and is in the 116th Army Band Unit out of Clay National Guard Center in Marietta, Georgia where he performs regularly on trumpet and electric bass.  He is also member of the Music Educators National Conference, Georgia Music Educators Association, and Phi Mu Alpha Sinfonia.

Mr. Libby lives in Gwinnett County with his wife Toni and 4 boys Jackson, Carson, Bryson, and Ethan, and their rottweiler Gus.